Prior to England’s Monday night match against Bulgaria I observed that UEFA’s three-step protocol for incidents of racist behaviour in stadia failed to protect players from abuse. To the contrary, it provided spectators with windows in which to abuse players without risking the match’s abandonment.

That failing played out in the appalling scenes on Monday night. Groups of spectators took full advantage of UEFA’s lax attempt to combat their behaviour, forcing two stoppages before calmly removing themselves from the stands in the first half.

England’s players, who had the option to call for the third step but elected to play on, have been commended for the calibre of their response and performance. Whilst the third step was not enforced, the proximity to abandonment raises the question of what the fallout would have been.

A concern for fans will be their right to refunds. Tickets for England matches are sold via the England FA. The FA’s Match Tickets Terms and Conditions prescribe that if a match is abandoned after kick-off, fans are entitled to free admission to any rearranged match. If a match is not rearranged – as would likely be the case for those abandoned under the protocol – fans are entitled to the following refunds:

However, the Terms go on to explicitly prohibit fans from claiming for loss of enjoyment, travel or accommodation costs – presumably a considerable sum for many away fixtures.

Obviously the abuse can have a wide range of impacts on  the receiving players, from the emotional stress to dealing with unwanted post-match PR interest. Players of the team whose ‘fans’ have been abusive, though not themselves offenders, may nonetheless be tarnished with the same brush.

Whilst a player’s personal sponsors are unlikely to be able to terminate agreements if a game is abandoned because of fans’ conduct, they may be more reserved when it comes to committing to new deals with players whilst this sort of cloud hangs over the national side.

This consequence may be unfair, particularly considering the efforts of Ivelin Popov who pleaded with fans to stop racist chants; Marcus Rashford praising the Bulgaria captain’s courage post-match. However, it is reassuring that football’s commercial forces, powerful as they are, are aligning themselves behind players outspoken against racism - when announcing a partnership with Raheem Sterling last week, Gillette referred to his stance on tackling racism as a reason for the sponsorship.

The fallout for teams will have a commercial and ‘sporting’ impact.

The national federation should have insurance that covers the refund of tickets, but real commercial damage is likely to come from sponsor backlash. As with players, a team with abusive fans may struggle to attract sponsors and existing sponsors may seek a ‘get-out’ if they have the benefit of a wide termination clause which enables them to exit the deal on the basis that the sponsorship is bringing them into disrepute. This may be difficult to argue given it is the ‘fan’ conduct not the team conduct that is in question, but we have seen sponsors put pressure on rights holders in analogous scenarios (eg several sponsors of FIFA not renewing contracts during the height of the FIFA corruption scandal).

The ‘sporting’ impact comes from the regulatory sanctions that the team may suffer as a consequence of their ‘fans’ conduct.

Article 14 of UEFA’s Disciplinary Regulations (Edition 2019) prescribes a staged punishment for instances of racism and other discriminatory conduct.

In the first instance, the minimum punishment is a partial stadium closure. This penalty has proven particularly inept; especially when noting Monday’s match took place in a stadium partly closed due to Bulgarian fans’ racist behaviour in previous qualifiers.

A second offence is punished with one match played behind closed doors and a fine of € 50,000. Much has been made of this fine’s meagre level compared to others issued for more trivial abuses. For example, at Euro 2012 UEFA fined Nicklas Bendtner € 100,000 for revealing the logo of a betting company on his underwear while celebrating a goal.

Any further offence can be punished with more than one match being played behind closed doors, a stadium closure, the forfeiting of the match, a points deduction and/or disqualification from the competition.

Kick It Out has already urged UEFA to issue a points deduction and tournament expulsion - a response that would certainly give teeth to a protocol that proved woefully inadequate in Sofia. Anything less will, at best, show the abusers that they have worked out how to play the game and, at worst, invite repetition. 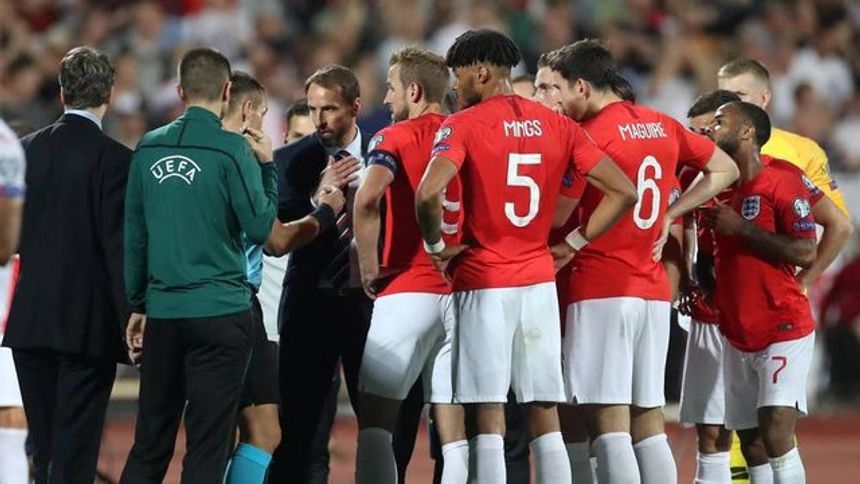